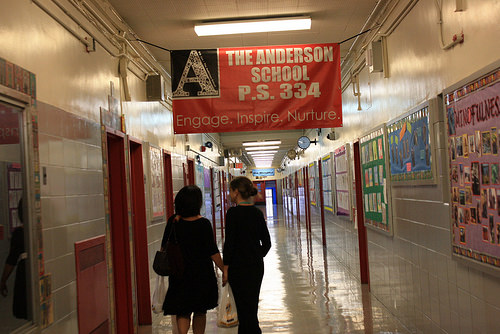 The Anderson School was started as the grades K-5 Anderson Program in 1987 by a group of visionary and tenacious parents who saw the need to accommodate young students with high academic potential. Anderson was designed to provide highly gifted children from diverse backgrounds with a curriculum that is accelerated as well as enriched.  From its opening as a program with four classes and some eighty students within PS 9, on W. 84th St. at Columbus Avenue, Anderson has now grown into a mature school of nine grades and over 500 students. In its multicultural public school setting, the school has brought together a truly remarkable community;  a team of imaginative, caring teachers; an innovative administration and committed, involved families who sustain Anderson through their very active participation.

In July 2005, Anderson was granted school status by the Department of Education. As a school (rather than a program) we have our own administration, budget, PTA and School Leadership Team. This momentous change followed the significant milestone of the launch of our middle school grades in September 2003.

In July 2009, the Department of Education moved Anderson to larger quarters on the corner of W. 77th St. and Columbus Avenue – right down the street from PS 9, our home of 22 years. We share our building, the William J. O’Shea Campus, with the popular District 3 middle school, The Computer School and the growing District 3 Dual Language Middle School, M.S. 247.

As an Amazon Associate, the Anderson PTA earns from qualifying purchases.